Here’s another Workbench Idea from Lake Erie Toolworks for you to consider and possibly build.  This English Style Workbench comes to us from Alex W. from West Kilbride in the United Kingdom.

Alex got his design ideas from a mixture of famed Workbench builders Richard Maguire and from Christopher Schwarz.  From these legendary influences, Alex crafted a phenomenal English style Workbench that will provide him with countless years of functional enjoyment.  We trust that you’ll all enjoy this latest workbench idea. 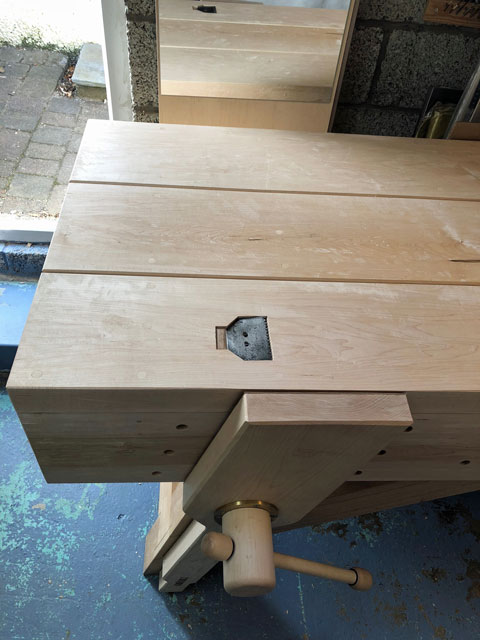 I built this workbench using the design from Richard Maguire’s English Workbench videos and plans as the starting point (www.theenglishwoodworker.com).  Christopher Schwarz has a similar design in The Workbench Design Book but with angled legs and I liked the look of that in giving added solidity so I adapted Richard’s design and changing his face vice to a leg vice.

The leg vice components are clearly from Lake Erie and very impressive pieces of kit they are!  I had some problems with the first screw/nut as the humidity in Scotland caused uneven swelling so that the screw was binding irretrievably.  Nick generously made me a new nut with wider tolerances and that works like a dream.

(Lake Erie Toolworks Comment:  To date, we’ve had approximately 1/3 of 1% of our many wooden vise screws that have gone out to customers have some form of humidity related binding challenge. Rest assured that in the very rare instance you might encounter a binding screw, just let us know about it and we’ll make it right – Just like with Alex featured here.)

The bench top, aprons and leg vice are rock maple the top is 65mm thick and the aprons are 50mm.  The leg trestles are agba.  In retrospect, the bench would have been heavy and robust enough in agba and it would have been significantly easier to work.  The comparison is that planing agba is like taking a hot knife to butter and planning the maple is like attacking concrete with a paint scraper.

Everything is held together with tapered wooden nails and they worked really well once I’d got the idea of allowing the drill to cool down every 5 or so holes.  The bench is finished with Danish Oil – this hasn’t changed the colour much but should protect the wood from some of the bumps and scrapes.

The bench is 2.25 m long, 0.79 m wide and 0.88 m tall.  To give an idea of scale, the plane on the bench is a Stanley 5½. I like the slightly taller bench and intend to add a Moxon vice using the offcuts and spare wood from the bench components.  I’ve no idea what the weight is but it’s very substantial – this bench isn’t going to move!